Dottybacks were once one of the most popular groups of marine aquarium fish to be found in every single kind of fish and reef display. However over the years they’ve been overly maligned and it’s now a pleasant surprise to see see a neon, orchid or sankeyi dottyback, and don’t even get us started on a seeing a proper sunrise or splendid Pseudochromis.

Only some of these species can set the bar for a pugnacious disposition, especially the Steene’s dottyback from the wild, but most available dottybacks are captive raised and much more docile and really deserve more airtime in the home reef aquarium. We’ve always admired a wide range of the more delicate Pictichromis species in particular, especially our aberrant pink & yellow dottyback which may be a hybrid, but once again RVS Fishworld has collected a very desirable mutant dottyback. 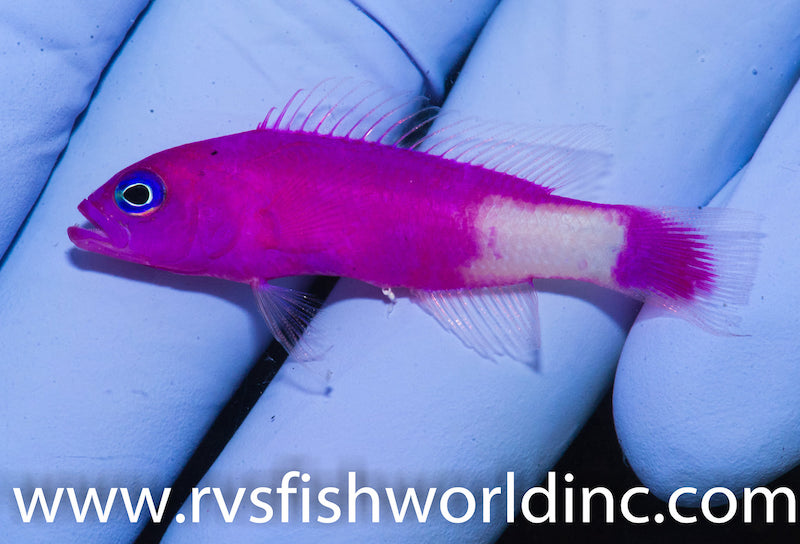 This neat Pictichromis porphyrea has an attractive patch of white coloration on both sides of its body, indicating that this aberration was not the result of some physical damage, a scar, but probably genetic in its origin. This small glitch may not be exciting for rare fish collectors but when you consider just how many of these pink strawberry dottybacks are collected and how common they are, you realize just how rare these aberrant specimens really are.

In an alternate universe where the various dottybacks weren’t demonized as much we could easily see how fish breeders would have already used these aberrant individuals as the seeds of a genetic breeding program to transform Pictichromis into a rainbow of new colors and patterns as we have already seen in the clownfish. Nevertheless, the unusual dottybacks keep popping up and Pictichromis are very easy to breed, even if they don’t garner much attention and are uneconomical to breed commercially, we can still hope that some future breeders may develop their own version of domesticated dottybacks.