New albino clownfish appear in a clutch of black ocellaris 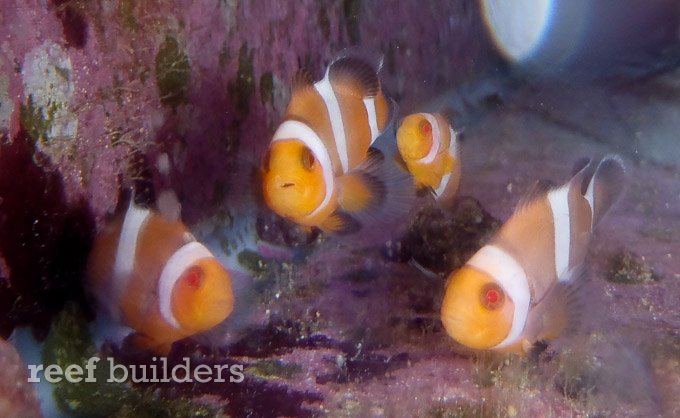 The albino clownfish which were discovered in a clutch of black ocellaris clownfish may not be as light and ghostly as a typical pink and white albino fish, but those red eyes are definitely not standard issue on a clownfish. The unusual albino-like clownfish were discovered by Tom Lamb of Cultured Critters in a batch of the popular black Ocellaris clownfish originally from Darwin Australia. Although Tom’s babies sport some degree of albinism, it is fascinating to see how differently it is manifested in these black ocellaris as opposed to the Tangerine clownfish from Proquatix and the first full albino clownfish from Marcel in South Africa.

Whether these new oddly colored clownfish from Tom are albino, leucistic or hypomelanistic is a horse we’ve thoroughly beat to death with in depth analysis by Matt Pedersen and Adeljean Ho. Nevertheless, in the video below you can see the perfect black ocellaris clownfish parents that spawned the mutants, and the other half of the clutch which is normally colored for Darwin black clownfish. It’ll be super interesting to see how the “albino black” clownfish develop as they age, and to see what further developments can ensue with these and the red-eye Tangerine clownfish added to the color palette of designer clownfish breeders.