We Removed A Ghost Net From Nusa Lembongan And It Got A Little Spooky!

Do you believe in ghost nets? When it comes to destructive marine debris, nothing is quite as ominous as the dreaded ghost net. The term ghost net described fishing nets which have been lost at sea drifting in the current, or become tangled on corals reefs, and unfortunately long after they are lost continue to ensnare and kill animals.
Ghost nets are often very large and heavy, impossible for a single scuba diver, or buddy team to remove. It is heartbreaking to see a ghost net and feel so helpless knowing it will continue to kill and not being able to do anything about it.
Recently a ghost net in the Cayman Island Caribbean was discovered by dive instructor Dominick Martin-Mayes and is a sobering reminder of the destruction these nets can cause long after they are lost.

As you can see from the size it is a monumental and dangerous task to remove a ghost next. You should never get close to a ghost net of this size without carrying knives or scissors, and you should always have at least one person supervising divers to help out in case of entanglement.

Ghost nets are no joke.

When I arrive in Nusa Lembongan island I was asked to join a retrieval party with Blue Corner Dive Shop, Blue Corner Marine Research team, and volunteers from the Marine Megafauna Foundation heading out to remove a hazardous ghost net. While not as large as the net from the Caymans, this net still required a team of ten people to remove and some careful planning before we entered the water.
My role was the safety support and to document the removal. Four people were assigned to cutting the net, while another was snorkeling above relaying communication to the boat.
On board two of our strongest guys were tasked with hauling the behemoth net into the boat, and the skippers had an equally important role keeping the boat from pulling away from the net. They also served as an extra set of hand with the bulk of the net made its way on board.

Underwater our main concern was with divers becoming entangled in the net, especially behind the back of the net drifting into the current. As we removed the net and cut away webbings from corals, you could hear a spooky popping sounds of nylon strands snapping under pressure.
Our goal was to cut away the bulk of the net first, and then tackle the remaining net which was entangled in the Acropora and Galaxea coral below. The whole ordeal lasted just over 40 minutes and thankfully no one was hurt or tangled in the net.
We removed this net from the SD dive site in front of Nusa Penida Island. 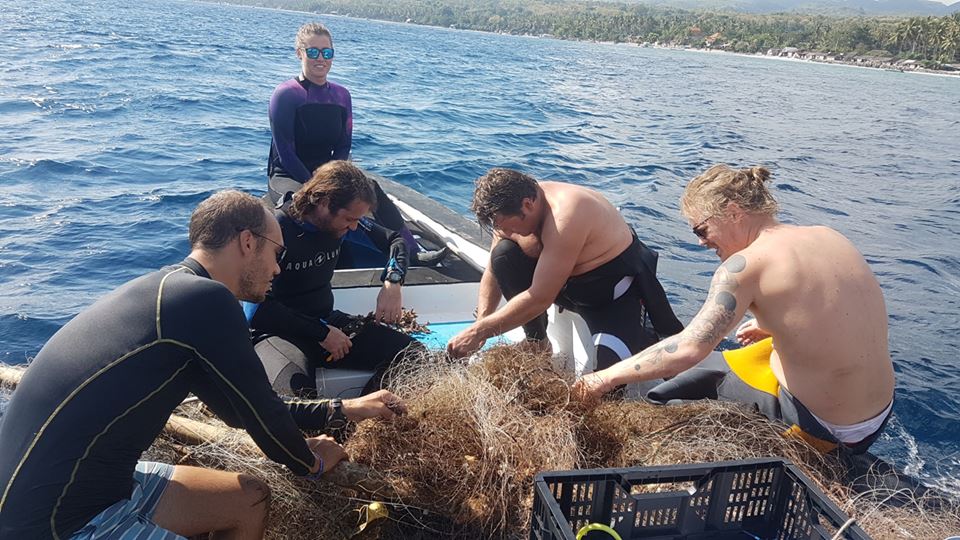