Snow Storm clownfish have been available to aquarists for at least half a year now from Ocean Reefs & Aquariums but now Sea & Reef Aquaculture is also stepping up with their own version. The ‘Storm’ clownfish strain was first unveiled and developed by Sea & Reef and while we knew this all-white variant was certainly in the pipeline, now we get to see how these different lineages compare.

The overall appearance of the Sea & Reef Snow Storm is precisely what you’d expect with white coloration dominating the entire clownfish’s body, and only a trace of black markings in the fins. There seems to be an interesting shade of iridescent blue in the ORA Snow Storm but since we haven’t seen enough of the Sea & Reef Snow Storm Clowns, the jury’s still out on whether this is desirable in person, or if a more pure white appearance is more attractive. 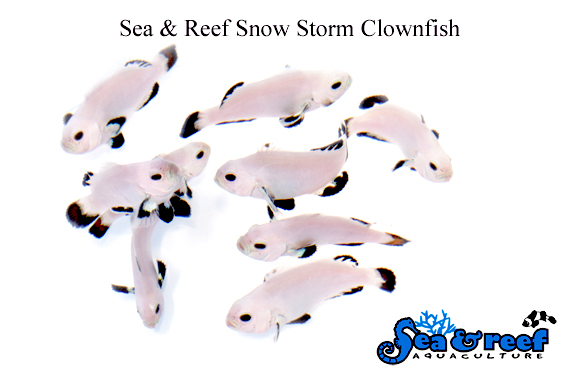 The black, orange, and mocha variants of the Storm clownfish are some of our personal favorites so we can’t wait to see how these new Snow Storms stack up compared to established white clownfish like the Wyoming White, Maine Blizzard, and Platinum Perculas. [Sea & Reef]

Reef Raft Indophyllia Reminds us of this Coral's Potential