The Price and Size of Frags in 2013 Will Shock You!

You never know what you’ll come across when you stumble down an internet rabbit hole because sometimes the things you find are way more interesting than what you might have initially been researching. Our most recent surprise discovery is exactly what happened when we went looking for some pictures of the classic ORA Miami Orchid Acropora, and landed on a simple post about a Dallas area frag swap on Reef Addicts.

There’s nothing really remarkable about this reef aquarium meetup from 2013, it’s the kind of local coral market the likes of which have transpired thousands of times over the last decade. However one very important detail turned Marc Levenson’s post into an important snapshot of how much the hobby has changed in the nearly nine years since.

In all disciplines there is a constant concern about Shifting Baselines wherein younger participants have a newer point of reference than the previous generation. With every passing year the collective point of reference for coral prices gets younger and younger until the current baseline is unrecognizable to veteran reefers and this is especially true if you compare the listed coral prices from this 2013 frag swap with today’s current market valuation. 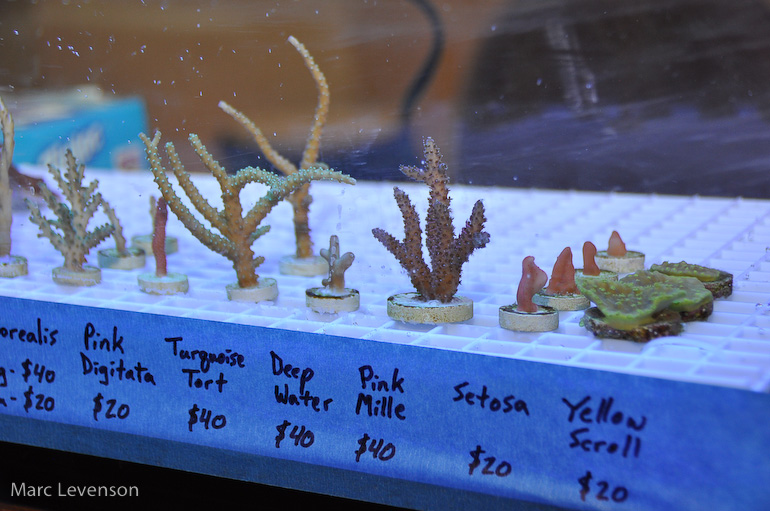 When we first started thumbing through the images we were initially amused by the surprisingly white lighting being used to display the frags which is a retro-refreshing comparison to the midnight blue lighting that corals are presented with at contemporary frag swaps. But it was the two images which showed some clearly labeled and clearly priced coral frags which stimulated us to share with you how large and affordable corals used to be.

Nearly all of the SPS frags pictured are at least the size of the frag plug upon which they are attached, and most of the corals are much larger and big enough to actually appreciate their growth form since they bear a resemblance to the colonies from which they were separated. Furthermore you’ll notice that not one frag has a three digit price tag and the most expensive pieces top out at $40 for very generous frags!

We welcome change and growth but thanks to shifting baselines the dramatic reduction in most coral frag sizes, coupled with dramatic increases in frag prices, makes today’s corals unreasonably more expensive than just nine years ago. We’re not saying that you can’t still find good deals and we’ll always ‘know a guy’ who can cut us some reasonably frags for very fair prices, but if you needed any evidence that the cost of purchasing new frags is on a worrisome trajectory, Marc’s images from early last decade serve as a time capsule of what we used to pay for decent coral frags. [Reef Addicts]

Coris flava, a New Species of Large Wrasse from Réunion

Leap Habitats Springs Forth from the Founders of Ecotech Marine

4 weeks ago
Site Sponsors
Reef Builders is Supported by: