The display refugiums is a neat concept in itself, but this display “refugium” takes things to a whole other level. This aquarium is  not really a refugium at all since it lacks macro algae and the purpose of nutrient export, but the concept is obviously based on display refugiums.

The display is part of a much larger and equally cool display tank, and actually sits under the tank integrated into the cabinet. If that wasn’t cool enough the tank is stocked to the brim with just super cool LPS corals and lit with blue T5’s for some serious color popping. 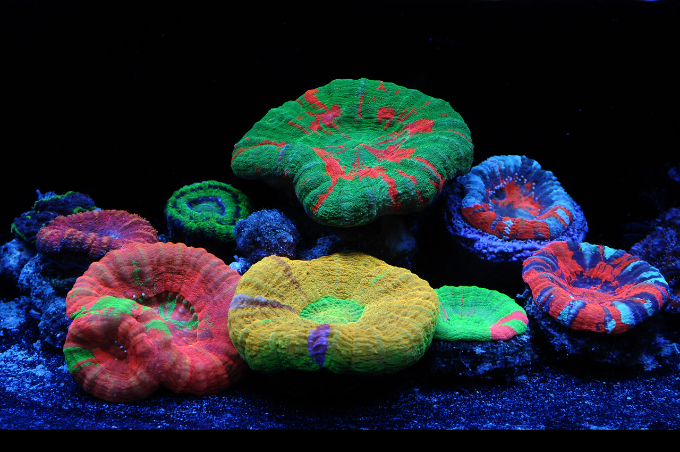 The main display, dominated by SPS, illimunated by two Pacific Sun metis XM LED fixtures. The Second display is illuminated by a a combination of a DIY LED fixture and T5 bulbs, and the LPS system is illuminated by solely T5 bulbs. Flow within the system is met by the use of four Tunze 6095, and Tunze Wave Box build into the back wall. A Vortech MP40 is used for the secondary display and a MP10 for the LPS system. A RedDragon 6500 serves as a return pump. A Tunze 7092, and a Tunze 7096 controller control the powerheads and a Aquatronica controller keep the whole system in check. Skimming is done by a Bubble King SM250 and a 1 HP Chiller keeps the temperature under control.

For more information on Hongtam’s system and LPS display be sure to head over to his thread on the the Hong Kong Reef Forum.

The LED as we know it turns 50 today