For five months every year (June-October), Chilean devil rays Mobula tarapacana gather in large schools above shallow seamounts in the Azores Archipelago. These oceanic wanderers are the least known of the mobulids, and the Azores is one of only a few locations where these rays gather in large numbers.

For the past three seasons, Portuguese marine biologist Ana Sobral has been working in the Azores, in an attempt to clarify which mobulid species (manta and devil rays) occur in the remote archipelago. No one is quite sure why rays and other pelagic migratory species are attracted to the seamounts, however, their annual appearance gives researchers a rare opportunity to study the misunderstood rays.

The first known documentation of mobula rays in the Azores was in 1777 followed shortly by the identification of two species, the giant manta M. birostris and giant devil ray M. Mobula before the turn of the century. However, it wasn’t until nearly 200 years later in 2001 when the Chilean devil ray was added to the list of known ray species in the Azores.
For her MSc research Ana analyzed 2252 photographs and 188 videos of rays taken by scientific, professional and recreational underwater photographers, mostly at the Princesa Alice, Formigas and Ambrósio seamounts. What she found was that three species, the Giant manta, Giant devil ray and Chilean devil ray frequent the Azores, and that by far the Chilean devil ray was the most abundant species, comprising a whooping 94% of rays from 23 years of slides and photographs.

Ana found that the Chilean devil ray was commonly mislabeled as a giant devil ray, and to the untrained eye, in cloudy visibility or from encounters in the distance, it would be difficult to tell the two apart. But when the two species are compared side to side using clear photography the differences are striking.
(C) Shows the irregular white and grey ventral markings, while the giant devil ray (E) is almost solid white. The top of the Chilean ray (D) shows a brown to olive surface, while the top of the giant devil ray shows dark blue surface with a crescent-shaped black band on the head base, triangular light areas on shoulders and white tip of the dorsal fin.
Manta rays are commonly identified by marking on the underside of the animal. The markings between and even within the species are so unique they can be used like a fingerprint to identify, not only the different species but also individual animals throughout their lifetime.

The Chilean devil ray is the only Mobula species with a ventral pattern, (bottom of the fins) while all the other mobula species have white bellies. The photo-ID is only possible for this species in the genus mobula, however since the Chilean devil rays is poorly studied, Ana is still unsure if the markings remain unchanged through time.
Ana assumed that since the overwhelming majority of rays from her study (94%) where in fact the Chilean devil ray, that the majority of previous documentation of rays in the Azores must have been mislabeled. These findings were important and may have direct implications for the conservation of the species in the Atlantic Ocean.

Once Ana determined the presence of the poorly studied Chilean devil ray the next step was filling the gap in their population statistics. With a grant from the Save our Seas Foundation Ana set up an underwater video observatory with the goal of detecting the presence/absence of mobulas and then comparing them to the numbers logged by the dive operators.
Aside from her work in marine biology, Ana is also a Divemaster in the Azores and works closely with the diving community to document the presence of rays, and the Ambrósio seamount, off of Santa Maria Island is one of the places where it is possible to find these big gatherings.

Ana installed a programmable video observation station, which consists of a GoPro camera and an old Ikelite video camera housing to photograph rays as they frequent the seamount. Unlike a traditional camera traps, which would be triggered anytime by animals passes by, Ana’s video observatory has a timer that turns it on and off, and takes pictures every 5 seconds for 10 minutes every 1 hour. 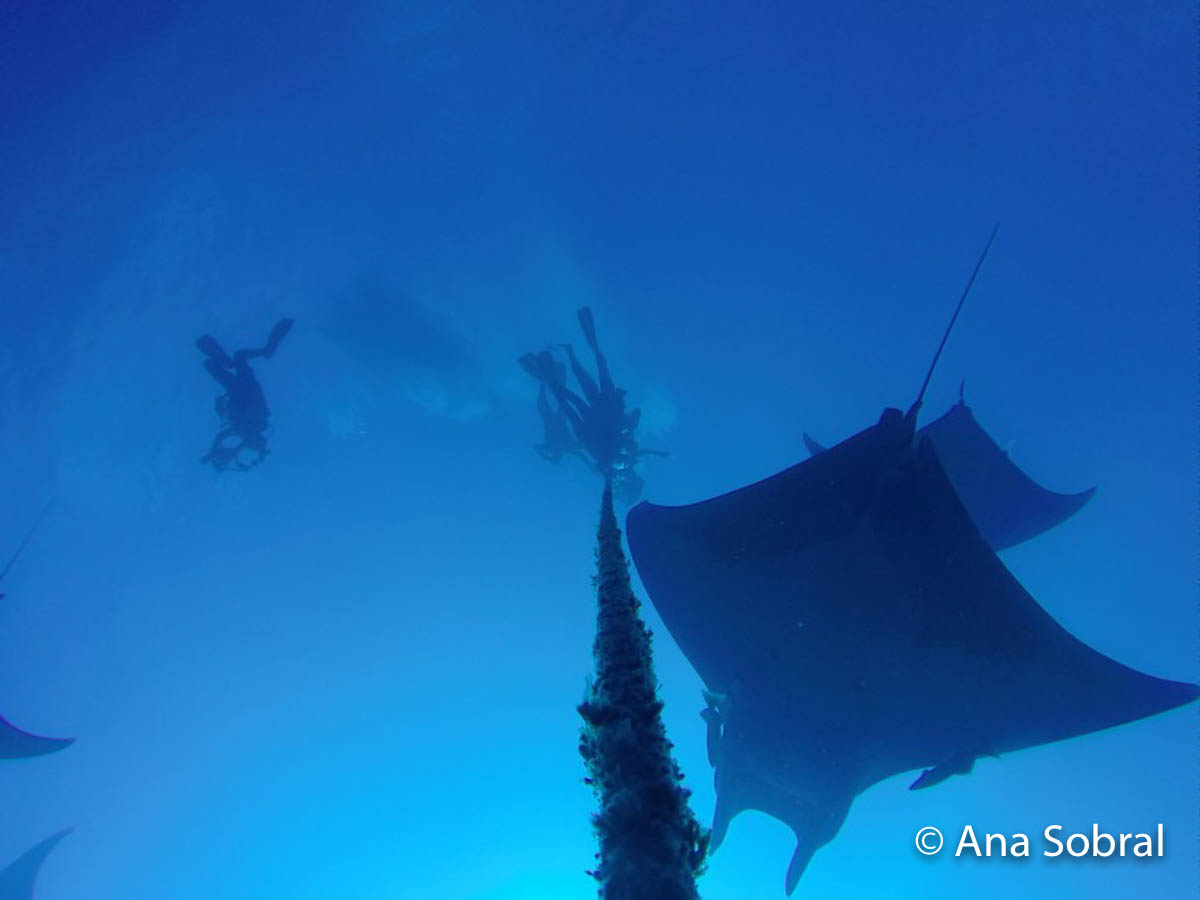 Inside the custom observatory, the GoPro camera and intervalometer (which controls the timer) are connected to an external energy source capable of operating for about seven days. All of this is placed in the old Ikelite housing and an external UV LED was added to prevent micro-organisms from accumulating on the lens.
Ana is looking to fill a data gap for the poorly studied Chilean devil rays by using the cameras to confirm the presence of devil rays and gain more insight into the overall population numbers. Ana says “one of the things we have learnt from these techniques is that the rays visiting the Azores are all adults and they include many pregnant females,” although many questions still remain about the mysterious lives of these oceanic creatures.

Ana’s photographic and video footage is helping fill the gaps in what we know about the devil ray population, however she believes more can be done to identify individuals and infer clues about their life outside the Azores. The Manta Catalog (devil rays belong to the manta family) is a way for divers, to send in their photos and videos of rays so they can be added to a photo-ID database.
How? Ana explains, “the Chilean devil ray is the only Mobula ray that has a ventral pattern and each pattern is thought to be unique to the individual, like a fingerprint. By checking photos of the patterns we can identify different individuals at different times and places and so ‘track’ their movements.” [Save our Seas]
Ana would like to thank the Save our Seas Foundation, The University of the Azores, the dive centers collaborating with this project and all the divers that contributed with photos/videos. To learn more about or get involved in the first ever mobula photo-ID project, you can visit their website HERE

Coral System by Korallen Zucht is totally new, from the makers of Zeovit

Traveling reefer blues and the anxieties of the vacationing aquarist

May 13, 2016
Site Sponsors
Reef Builders is Supported by: