Today we would like to focus on Favites pentagona or the Red and Green War Coral as it is commonly referred to in the industry. It has been a longtime favorite within many of our own aquariums.

We are not sure why we are so readily drawn to this coral. Perhaps, it’s because of the coral’s intense bright red color contrasting against the lime green mouths. Or maybe, it’s the ease of fragmentation for propagation with this coral species. Either way, this adaptive brain coral is a successful and eye-catching species.

Favites pentagona species is also called “War Coral”, or sometimes “Larger Star Coral” and has often been confused with the genus Favia, another closely related brain coral. The War Coral and it’s many color morphs are an amazing compliment to any reef aquarium. Usually, it can be found encrusting around live rock, close to the base of other coral structures. Occasionally, it will form itself into column like structures. 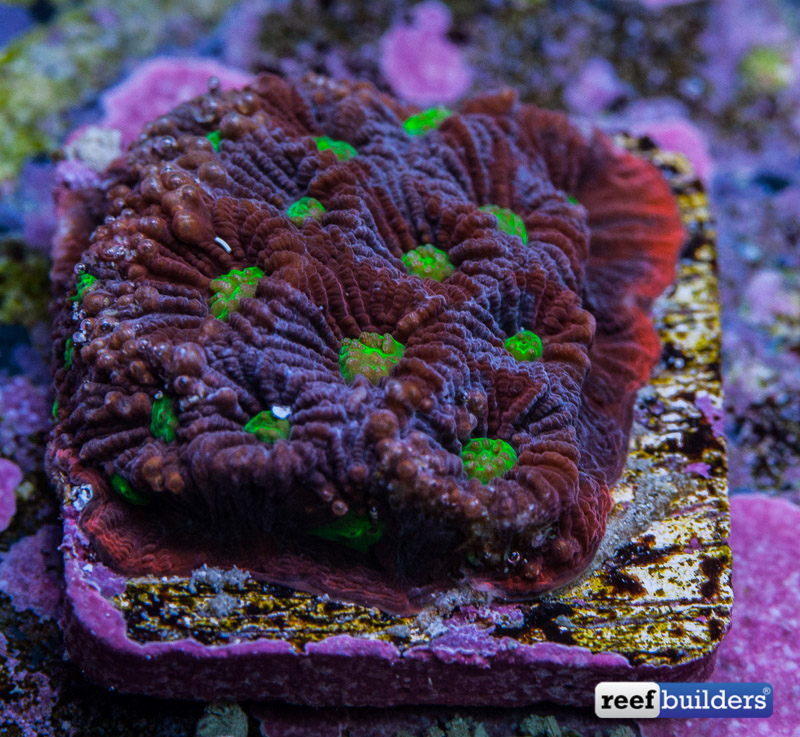 It is a semi-aggressive coral with sweeper tentacles that extend well beyond its base at night. It stings anything it can reach in search of food and to defend against other corals from potentially encroaching into its territory.

We have always used this coral to fill in certain areas in our reef base with a splash of color. Placement of the War Coral is consistently in the lower two-thirds of the aquarium with ample distance given from other coral species. They will also require moderate light and water movement.

The regular addition of calcium, strontium, and other trace elements will help it become a successful colony. As the coral slowly encrusts onto the reef structure it then takes on a very natural appearance.

Favites species will generally feed at night on a variety of microplanktons and brine shrimp. It would benefit from being fed 2-3 times a week close to lights out when tentacles begin to show. These feedings will help with the overall growth and health of the coral.

In time War Corals will grow enough to be propagated. This is achieved fairly easily through fragmentation of the mother or parent colony. We prefer to use a wet bandsaw or a rotary tool with a diamond cutoff wheel for most coral fragmentation.

Start to cut through the back of the coral skeleton, but not through the tissue. Be certain the new fragment is at least large enough to include 1-2 mouths. Once the skeleton feels loose from the parent colony, but still attached by surface tissue, use a scalpel to make a clean incision from the back through the tissue to complete the separation. 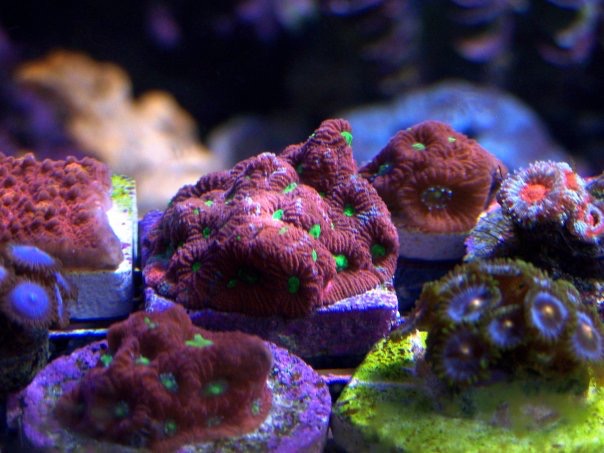 The fragment’s backing should be dried quickly. Then apply acrylate gel glue to adhere to either a frag plug or directly to a rock structure. The cut edges on both parent and fragment should heal quickly in moderate water flow and good water quality.

In 2005-2006 when this coral was gaining popularity, auction prices exceeding $175 for 2-3 mouth fragments. Luckily, this coral has proven exceedingly successful in aquariums and through fragmentation and time it has become much more affordable and available to aquarists in today’s market.

The Favites pentagona is a brilliant and beautiful brain coral species with a winning track record of sustainability in reef aquaria unmatched by many of its other “brainy” counterparts.