Whale Sharks in the Galapagos

For the biggest fish in the sea, whale sharks (Rhincodon typus) are rather elusive. Aside from a few known feeding aggregation sites, which are mostly frequented by juvenile males, baby whale sharks, adults, and females whale sharks are rarely seen.
Whale shark feeding sites have been identified in Isla Mujeres Mexico, Mafia Island in Tanzania, also Madagascar, Tofo Mozambique, the Philippines, Seychelles, and Thailand. But still, only juvenile males have been counted in these sites.
There are some exceptions to this general rule, however, where we find huge pregnant momma whales sharks. These are generally offshore seamounts or volcanic islands. Adult females are typically found in oceanic waters around or outside the 200 m isobath, where the ocean is 200m deep, while juveniles tend to stick to shallower nearshore coastal water.

Dr. Simon J. Pierce has the job we all dream of. He is the world’s top whale shark conservation biologist and travels the world studying these gentle giants. Identifying whale sharks populations outside of their familiar aggregation sites is important for the conservation of this globally endangered species.

One of the best places in the world to see gigantic pregnant female whale sharks is 300km from the nearest town, around Darwin Island, Galapagos. Whale sharks normally spend less than a day at Darwin Island not to feed but most likely to calibrate their built-in GPS.
Historical volcanic eruptions at Darwin have created concentric rings of magnetically polarised rock on the seafloor, providing a detailed relief map for animals.Whale sharks are acutely attuned to the Earth’s magnetic field and they use these oceanic seamounts as a way to calibrate their internal compass.
But here is the problem. Darwin Island is remote, and it’s hard for Simon and his team to visit Darwin for more than a couple of weeks per year. Simon has dedicated his life to photographing, studying, and tracking whale sharks, but that doesn’t mean the average diver help too. Cue Wildbook an online photo-identification library for whale shark. 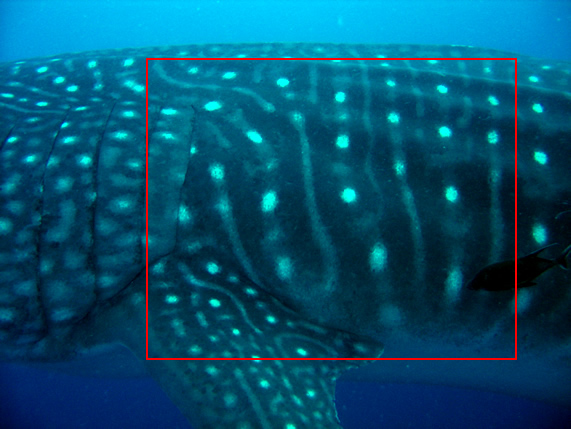 Whale sharks all have a unique pattern of spots, meaning that each individual is photo-identifiable. The Wildbook uses photographs of the skin patterning behind the gills of each shark, and any scars, to distinguish between individual animals.

In 2017 Simon and his team documented 7 new sharks over 36 dives, raising the total number of whale sharks identified from the Galapagos to 180.
However, none of these sharks have ever been re-sighted outside the Galapagos.

Where are the sharks going?

They generally swim right out into the Pacific Ocean, far from any landmass. There’s a long productive zone where cooler waters from the Peruvian coast meet warm tropical waters above the equator and, based on tracking data, the whale sharks are feeding out there. They’re also, most likely, giving birth in that area too.

In a recent newsletter from Simon he put out the call for scuba divers to submit their whale shark photos from the Galapagos to the global Wildbook database at www.whaleshark.org. Photos from visiting divers (from years past, too) are a huge boost to their research efforts.
Where sharks breed, and how often they are breeding is still an unknown. The more photos they receive the faster they can solve the whale shark mystery.

We’re just the messenger! Make sure to sign up for Simon’s newsletter and visit his website for inspiring shark stories and incredible whale shark imagery from around the world. If you want to see sharks with the experts check out Simon’s public trip scheduled for 2018/19. There’s also a Galapagos liveaboard trip for 2019.

Mame Mini-Light is the most Pico LED Ever!