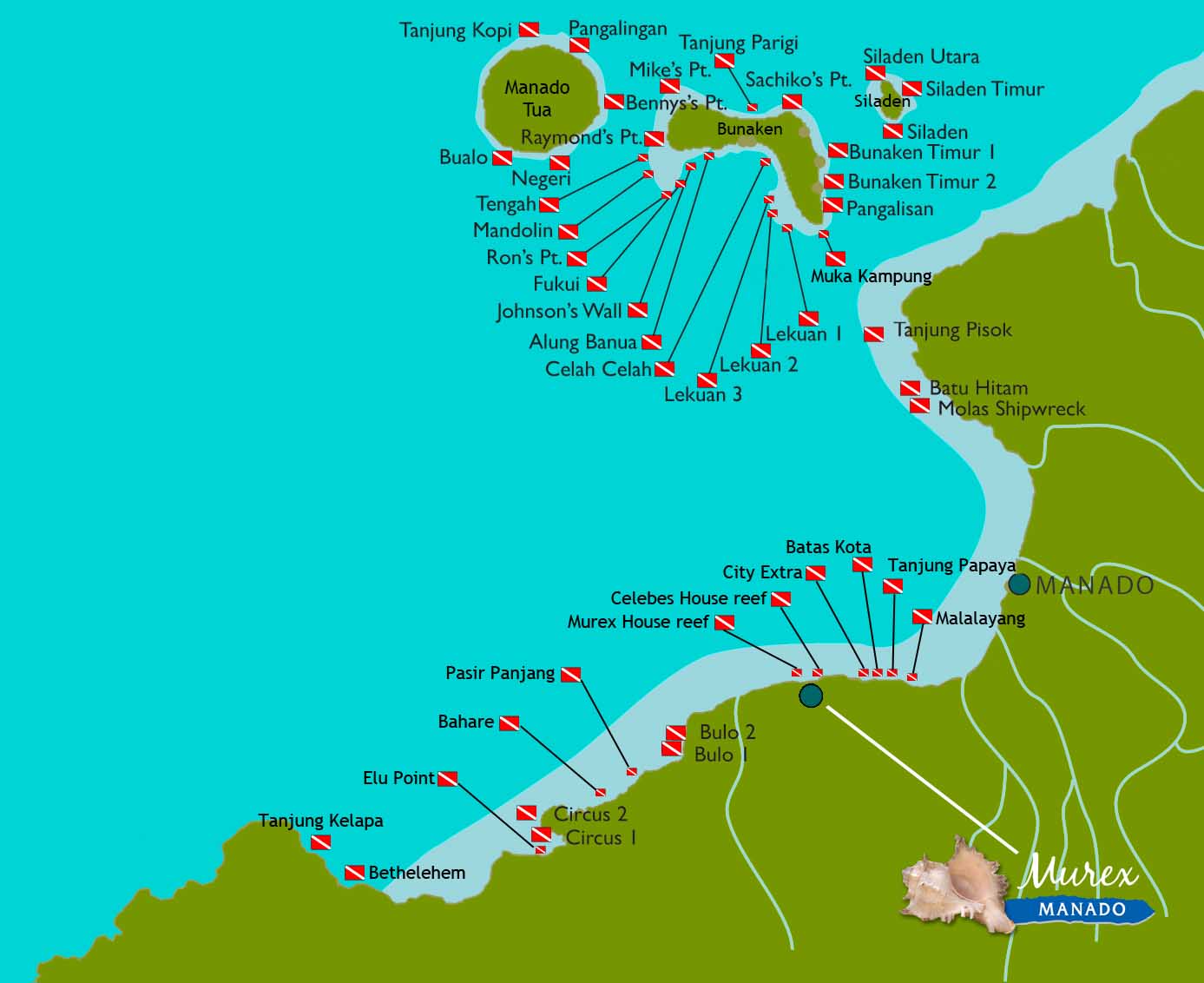 Jalan Masuk is a dive site in Bunaken National Park south of Bunaken Island. The dive site is located between the Lekuan 2 and Lekuan 3 site near the entrance of the part. Jalan Masuk is Indonesian for entrance, and you can see the dive site it’s at the entrance of the passage for the island.
The dive is a vertical wall with plating and encrusting corals on the sides, and hardy corals on the reef tops. At times you can have quite strong currents through this channel and you can notice this because many of the plating corals have taken on an encrusting form sticking close to the reef wall.

There are also some nice Acropora colonies jutting off the side of the wall, and I was able to photograph one coral that has a perfect example of a strong solid base. Acropora corals, in particular, will focus most of their energy on creating a thick base able to hold up the weight of the colony before spending energy to branch or plate. 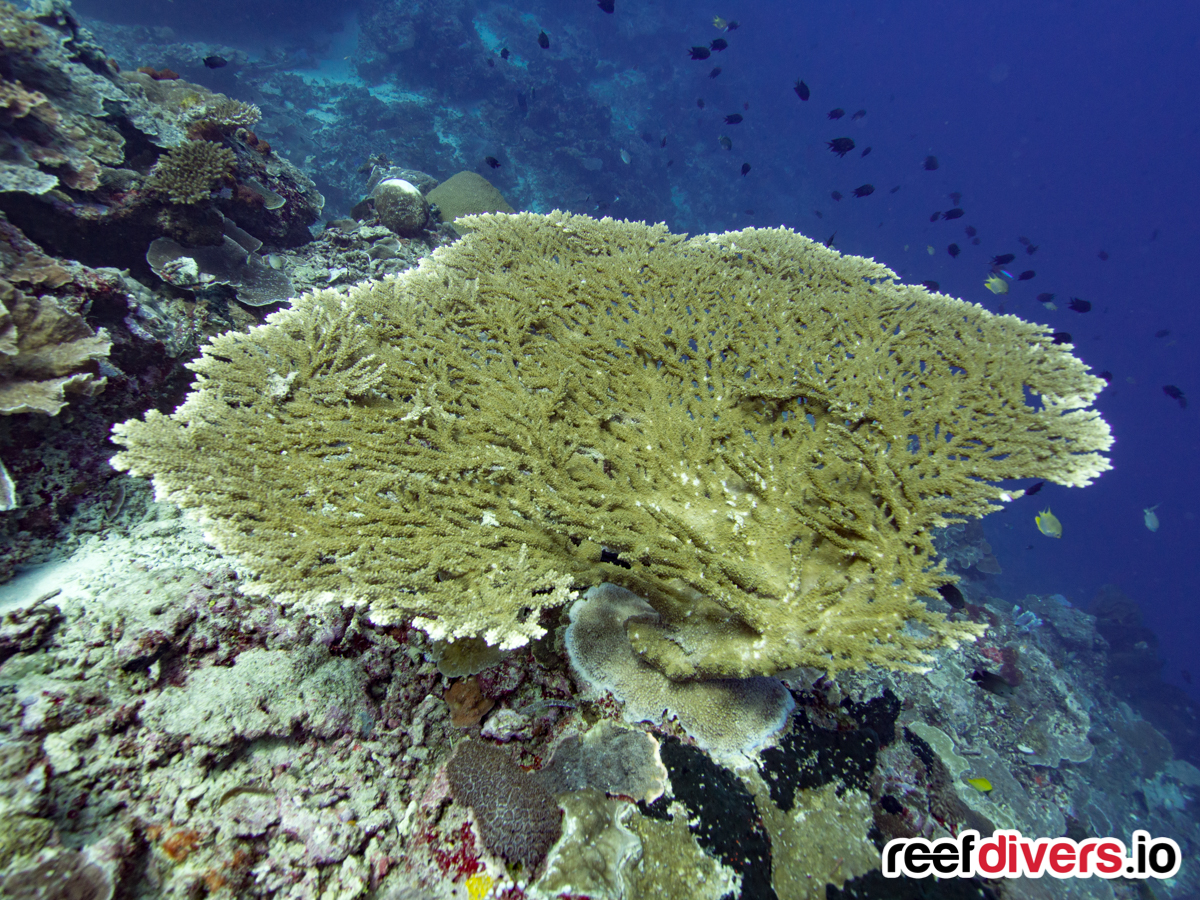 Some of the corals which really stood out to me on this dive were the Mycedium corals. Mycedium corals are found in every color imaginable and make great photography subjects. Mycedium is distinguishable by their inclined cup-shaped corallites that always face away from the center of the colony and corallites are between 5 and 15 millimeters in diameter depending on the species.
We found a few large colonies of Mycedium sprawled out along the rock wall and was able to photograph two of the common species Mycedium robokaki and Mycedium elephantotus next to each other showing the distinct difference in corallite size.

Along the side of the reef wall, we found quite a high diversity of corals species, honestly more than we could count!
I love this picture because it really shows off the coral diversity of Jalan Masuk, and highlights just how special coral diving in Sulawesi can be. There are at least ten species of coral just in this one photo, and we can see how the corals are competing for space.

We found some rather large colony of Montipora, and several different species of Pachyseries and Platygyra. In the second picture set below you can see a Pachyseris speciosa on the left and  Platygyra contorta on the right.

The top of the reef wall in Jalan Masuk is really a sight to behold. Hardy species of coral in branching and massive form cluster around the top edges of the wall, framed by the deep azure water behind.
For coral photographers this is a dream subject and going through my photos I found it hard just to pick a few images. They were all just so darn pretty.
The top of the reef slope has a crowning layer of Isopora corals, similar to what you find at the Mandolin wall site. These thick branches can withstand the high current that can flow over the reef crest.

Again just like the side of the wall there were more species of coral than we could count. Some notable colonies on the reef top were branching Hydnophora, Porites, and Pocilopora corals. You can also find boulder of Porites and Goniastrea. Some bigger colonies of Lobophyllia and of course a few colorful Symphyllia brain corals.
You will notice that all of these corals have thick dense, even compact skeletons. All a strong indication of the flow condition on this reef top. Near the end of the dive, I spotted a unique coral formation and had to go in for a closer look. 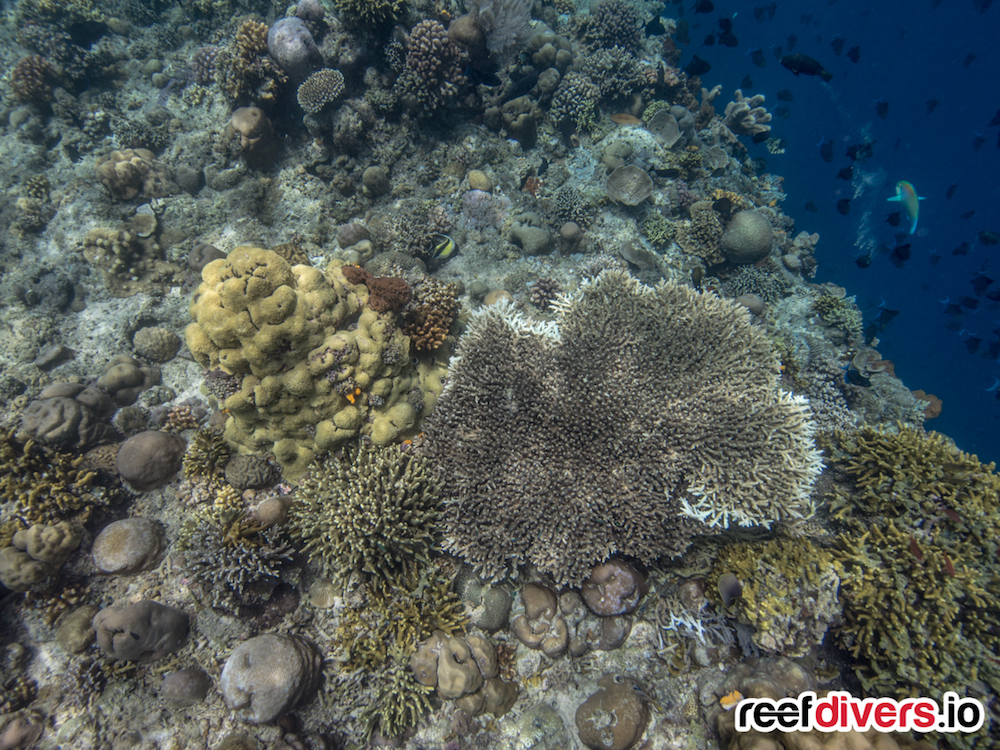 The bumpy yellow colony had me intrigued. It was unlike anything else on the reef. Upon further investigation, we quickly identified this coral as a Turbinaria. The bright yellow color, cone-shaped corallite, and polyps which are outside the coral gave it away. Narrowing down the species was a bit more of a challenge.
Growth form or shape alone is often not enough to positively identify a species as coral growth is influenced by their position on the reef. Corals can take on different forms depending on condition like flow, light, and nutrients. In this high flow environment, this species of Turbinaria, which mostly grows as a plating corals, takes on a more encrusting, boulder shape.


My first guess was Turbinaria stellulata, which is an encrusting species of Turbinaria forming dome shapes colonies on upper reef slopes. This encrusting species is a rare form of Turbinaria which has large corallites. The species above shows some plating form on a small scale and the corallites are still quite small.
After some deliberation and consulting with other coral spotters, we came to the conclusion that this was most likely the common species Turbinaria reniformis, with a compact, encrusting form due to the high energy reef top environment. This is the perfect example of what makes coral spotting and coral identification such a challenge, but also thenever-endingg treasure hunt searching for those rare and unusual species.
Thanks to Murex Dive Resorts for showing us around Norther Sulawesi.

Orphek Amazonas 320 are custom-configured for large and public aquariums

May 2, 2018
Site Sponsors
Reef Builders is Supported by: