Bunga, Laeta & Phenganax are the new taxonomic homes for a wide variety of small, nondescript octocorals that often hitchhike into our aquariums on coral bases and live rocks. Phenganax is an existing genus which just inducted two new species but Bunga and Laeta are newly created genera to classify two very unique, teeny tiny nano polyps. 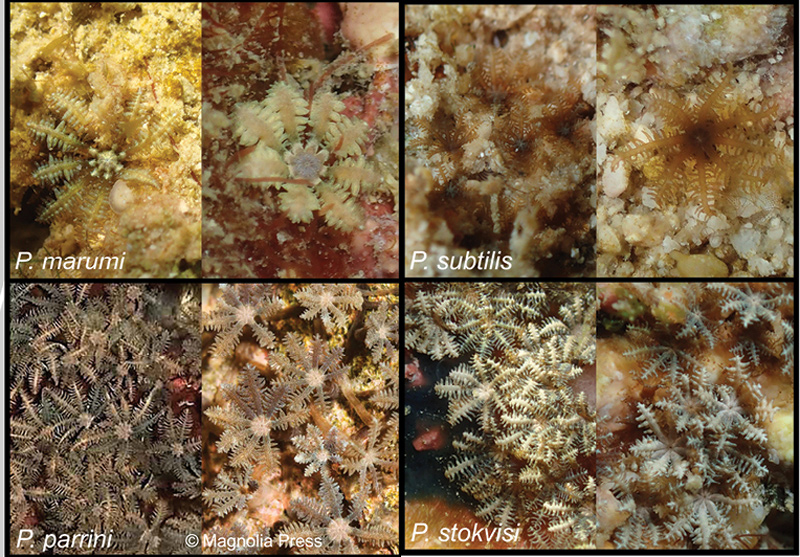 The two new genera and five new species were sampled mostly around Sabah, Malaysia which is considered part of the center of biodiversity for the Coral Triangle, itself an epicenter of coral abundance for the world. All of these ‘stoloniferous’ grow along the substrate similar to clove polyps and were collected in reasonable depths for SCUBA down to 60 feet.

Oddly enough, we may have already encountered some of these new species of encrusting polyps in aquaria because when they like an aquarium, they can grow out of control like the Sarcothelia blue polyps that we’ve been warning you about for years since they can really take over. We like to think we kind of know our coral names when it comes to typical, human scale corals both soft and stony but these micro octocorals are so small you’re really wading into microscope territory to appreciate their differences.

Their tendency to grow out of control is more of an issue in a large aquarium where they can really get away from the regular husbandry of the aquarist, but they are still probably a decent consideration for nano tanks, as long as you know what you’re getting into. [ZooKeys]

Coral-Bacteria Communities are WAY More Important than Anyone Thought

Corals are Migrating to Cooler Water, Shifting Towards the Poles