Parascolopsis akatamae is a new species of dwarf monocle bream from Japan which has a very curious and unique feature. Fluorescence is well documented among many different groups of reef animals, especially the corals, but the new Akatamae bream exhibits a startling degree of natural fluorescence.

Nearly four years ago we shared our own experiments in photographing fluorescence in common reef fish, discovering highly fluorescent markings in common reef fish such as wrasses, pipefish, anthias, and a particularly brilliant jawfish. In recent years there has been a lot more investigation into the phenomenon of fluorescence in reef fish, some species of damselfish and wrasses showing very localized fluorescent patterns that are not visible under broad spectrum lighting.

The newly described Parascolopsis akatamae shares this unique, localized fluorescence and it has been used to distinguish it from a very similar congeneric species. The Akatamae Dwarf Monocle Bream is nearly identical to the closely related Parascolopsis eriomma under white light but the ‘pattern of biofluorescent emission’ is clearly different, with the former being having much brighter yellow-green fluorescence across the dorsal fin, and a bright coloration across the lower edge of the gills which is absent in the latter.

Alas, biofluorescence in reef fish is much more muted than it is in our aquarium corals, and requires very deep blue, near UV lighting spectrum as well as yellow orange barrier filters to see them, so this is not a fish that will ‘glow’ under typical blue aquarium lighting. However if you wanted to try, Parascolopsis akatamae has a wide distribution ranging from Japan to Taiwan, Philippines and even northern Indonesia. [BioTaxa] 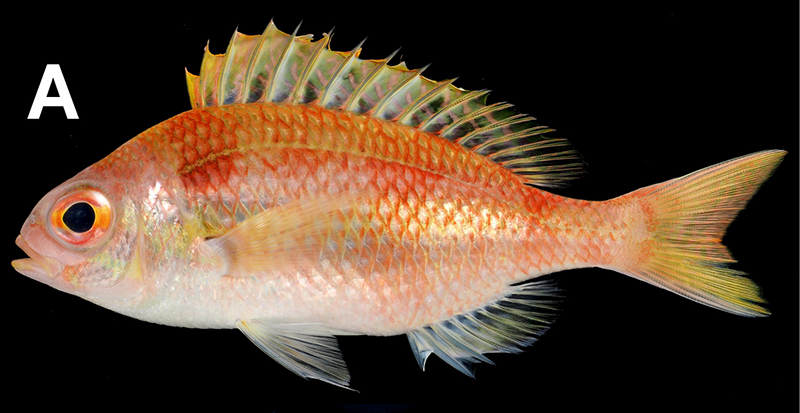