Hybrid angelfish and finding them is one of the more interesting aspects to being a fan of the more than one hundred species of the most colorful and interesting fish on tropical coral reefs. Sometimes the hybrids are very obvious like the radically patterned venustus x multibar hybrid, others like the blueface x sixbar hybrid are more subtle, but still recognizable.

There are three species of Holacanthus angelfish in the Caribbean and two of them, the queen and blue angelfish which frequently hybridize as a cross known as the Townsend Angelfish. But one species, the rock beauty angelfish, has been known to hybridize with the queen angelfish and while both species are fairly common and widespread in the Caribbean, their hybrid crosses have remained surprisingly rare.

To date there have only been two very reliably confirmed hybrids of Holacanthus tricolor & H. ciliaris with one image from Dynasty Marine pictured above, and another hybrid individual is published in Kyoshi Endoh’s Angelfishes of the World. Both of the ‘Beauty Queens’ a bright yellow body coloration overall with a dusky, dark patch over most of the posterior of the body which is a blend of the rock beauty’s very large black patch covering the rear two thirds of the body.

As with Clarion x Passer hybrids, similarly colored species of Holacanthus can produce hybrids with a blend of features that may be very subtle especially when they are younger and are not yet showing their full adult coloration. With these guidelines in mind we’ve long inspected a huge number of slightly oddball specimens of queen angelfish, over many years, especially those with brighter overall yellow coloration. 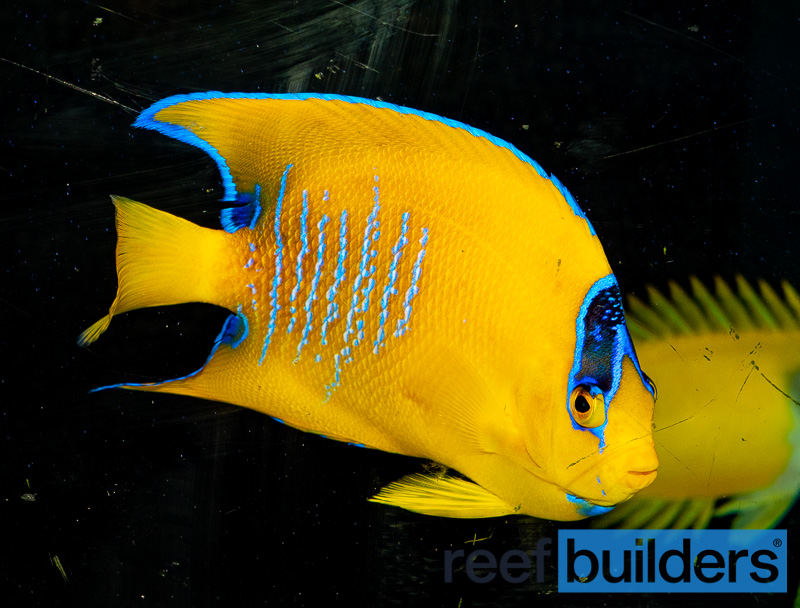 While perusing the saltwater fish tanks at Top Shelf Aquatics a couple weeks ago we came across a remarkable example of a fish that had been traded in for bullying, no surprise for a Holacanthus angelfish, but what caught our attention was not just bright yellow coloration throughout the entire specimen. Not only is this fish very yellow, but the blue bars on side of the body are reduced to a much smaller region that corresponds to the black patches of young Holacanthus tricolor. 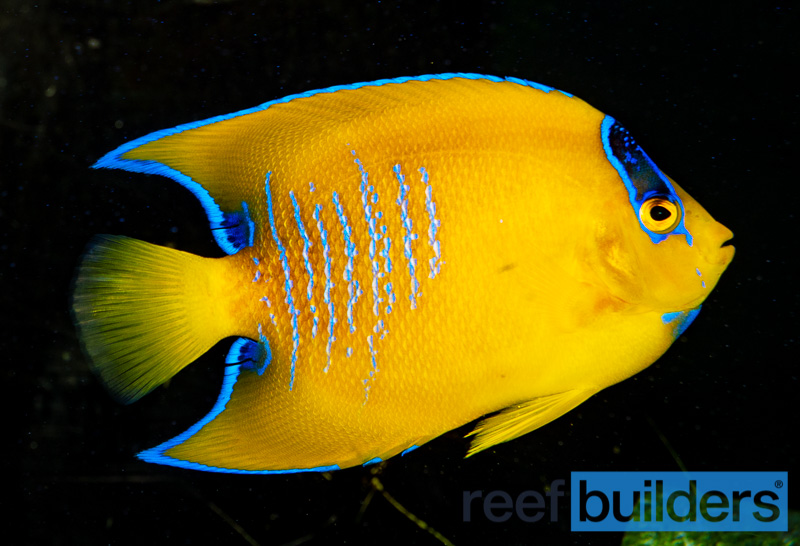 We passed our photos of this remarkable fish around to a few other fish heads and while some were amazed, others didn’t completely agree with our train of thought, but we only have a couple clear photographic examples of beauty queens to go off of. There’s also the case of reciprocal hybrids we need to take into consideration as hybrids with a female queen and male rock beauty should look pretty different from those produced with a female rock beauty and a male queen angelfish.

The funny thing is that if this fish really is a beauty queen angelfish we would expect it to lose much of the blue coloration on the body and face, with the reduced patch of light blue bars transitioning into a patch of darker color along its backside. Regardless of its true parentage we thoroughly enjoy the mental exercise of teasing out the less obvious angelfish hybrids, it really helps get into the weeds of what is unique about the pure bred species but in the meantime, we hope to get some updates on this interesting yellow queen angelfish as it grows larger and more mature.

How To Glue Corals in Your Reef Tank [Video]

Email the HI Gov't and Tell Them You Want Hawaiian Fish Back!