12 of the Rarest Corals We’ve Found on Wild Reefs

The definition of a ‘rare coral’ means very different things depending on who you ask. A rare aquarium coral is not usually a rare species, but a very unique or unusual color or strain that everybody wants, and is often associated with a certain degree of hype and high demand from aquarium coral enthusiasts. These corals usually start out as an initial seed colony which needs to be grown out and propagated multiple times and eventually reach a saturation to the point where people are giving them away, although some strains might grow pretty slowly like red Leptoseris.

But when we go diving, the rare corals we are always on the lookout for are legitimately very hard to find in the wild. This could be a result of these corals being very localized in where they live, endemic to a particular region, cryptic in their appearance, or a combination of all of these factors. Multicolored Pectinia are a perfect example because they are found in very shaded spots, or very turbid water, sometimes in the back of caves in deepwater, making them hard to find and in less than desirable diving conditions. In fact, a lot of the rarest corals we’ve encountered while diving were in challenging dive conditions because cloudy turbid water really limits how far and how much you can see, so you really have to cover a lot of ground and stay close to the reef in order to see anything. 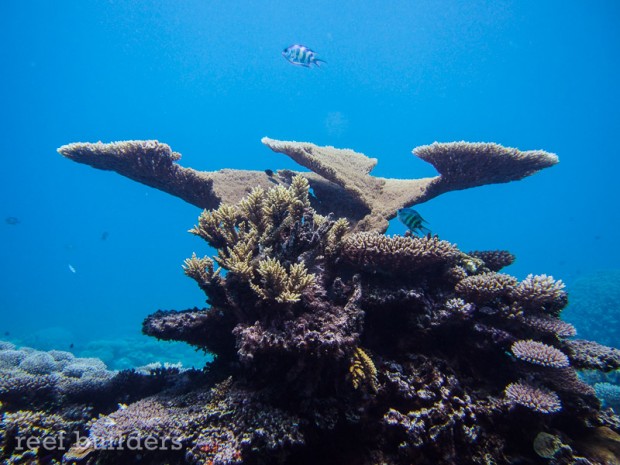 But mostly, finding rare corals on wild reefs is more about having that search image in mind, making the effort to reach far flung coral reefs, and it really helps to have good dive buddies who are also seeking rare and unusual corals with you. Sometimes – most of the time – we end up seeing lots of great corals but not necessarily anything to write home about, or share with you on this platform. But man oh man, when we finally find something really rare and unique, it’s a rush to finally get to see corals in person, in three dimensions, that we previously had only known about from small, old or grainy photographs.

It is our hope that over a lifetime of diving we’ll eventually see almost every species of coral in the wild, and document the under-appreciated Scleractinia of the world, especially before they become even harder to find. With that explainer out of the way, we hope you enjoy this selection of twelve of the rarest wild corals we’ve discovered on wild coral reefs, and we can’t wait to get back out diving so we can come across and document even more.

We tracked down the Purple Monster Acro to its original source

Palauastrea ramosa is your weird coral of the week

Updates and Lessons Learned From Our 90 Gallon Reef Tank